This talk was originally presented by Eric Evans at QCon London 2010. The 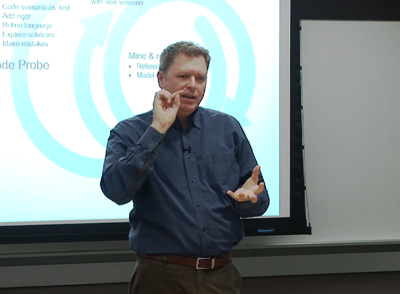 recording is made during a meetup of DDD-NYC SIG in May of 2010.

After a decade of heavy process, the Agile revolution of the late ’90s threw off the dead hand of big upfront design. The bloody purge that followed was needed!

There were unintended consequences. Too many teams interpret “Agile” as a permit to not think about design. But if they have ambitious goals, Agile teams need more than standup meetings and iterations. Many teams get off to a quick start, building lots of features in early iterations, but end up with a “Big Ball of Mud”. Without clear and well-structured code, they cannot sustain their pace and also put themselves at risk of, one day, encountering a critical feature they simply cannot deliver.
Without the common understanding between developers and stakeholders that is forged in domain analysis, one of the greatest benefits of iteration, the deepening communication about what the software should do and how it should do it, is never realized.

We must not return to the “Analysis Paralysis” that we used to endure (and that many teams still do), but interpreting “Do the Simplest Thing” as “Do the Easiest Thing” doesn’t work either.

This talk will consider ways of incorporating modeling and design into the iterative process in a lightweight way that increases communication with stakeholders and decreases the likelihood of painting ourselves into corners, without returning to the dead-hand of the analysis phase.
As a concrete example of how such techniques can be incorporated into the Agile framework, we’ll have an overview of a simple process Domain Language has used with its clients for the last six years.

The right kind of modeling and design, far from bogging down a project, leads to a livelier and more sustainable development pace.